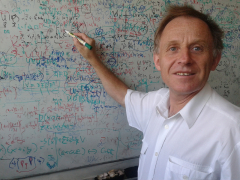 In the space of bipartite unitary gates one distinguishes the set of local gates, formed by a tensor product, $U=V_A \otimes V_B$. Another distinguished set contains gates of extremal non-locality, which maximize the entropy of entanglement defined by the operator Schmidt decomposition of a unitary gate $U$. If the reshuffled matrix, $U^R$, is also unitary the matrix $U$ belongs to this class and is called dual unitary. The matrix $S$ corresponding to the SWAP operation is strongly non-local and dual unitary, but it does not change entanglement of any state it acts on. To describe creation of entanglement in the system one defines entangling power of a gate. Its absolute maximum is achieved for any dual unitary gate $U$, such that its partial transpose $U^{\Gamma}$ is also unitary. These gates, called two-unitary, do not exist for dimension $d=2^2$, but exist for $d=3^2$. We present an analytical construction of such a gate $U$ of order $d=6^2=36$, which leads to a solution of the quantum version of the famous problem of $36$ officers of Euler [1]. It implies a pair of quantum orthogonal Latin squares of order six and an Absolutely Maximally Entangled (AME) state of four subsystems with six levels each. It enables us to construct a quhex pure nonadditive quantum error detection code useful to encode a 6-level state into a triple of such states. Using such a state one can teleport any unknown, two-dice quantum state, from any pair of two subsystems to the lab possessing the two other dice forming the four-dice system. Our result imples that $2$-unitary gates exist for any squared dimension $d=N^2$ with $N\ge 3$. A matrix $U$ of order $d=N^k$ is called k-unitary or multiunitary if it remains unitary after any of possible ($2k$ choose $k$) reordering of the matrix. Any such a matrix leads to an AME state of $2k$ subsystems of size $N$. A simple example of a $3$-unitary matrix $U$ of order $2^3=8$ corresponds to an AME(6,2) state of six qubits. 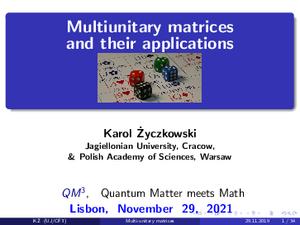