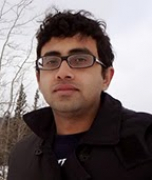 The dimer model is a model of uniform perfect matching and is one of the fundamental models of statistical physics. It has many deep and intricate connections with various other models in this field, namely the Ising model and the six-vertex model.

This model has received a lot of attention in the mathematics community in the past two decades. The primary reason behind such popularity is that this model is integrable, in particular, the correlation functions can be represented exactly in a determinental form. This gives rise to a rich interplay between algebra, geometry, probability and theoretical physics.

For graphs with very regular local structures, exact computations of the correlation functions are possible by Kasteleyn theory. R. Kenyon pioneered the development of the subject in this direction by proving that the fluctuations of the height function associated to the dimer model on the square lattice converges to the Gaussian free field (a conformally invariant Gaussian field). However, such computations seem only possible on graphs with special local structures, while the dimer model is supposed to have GFF type fluctuations in a much more general setting.

In this talk, I will give an overview of an ongoing project with N, Berestycki (U. Vienna) and B. Laslier (Paris-Diderot 7) where we establish a form of universality about the GFF fluctuation of the dimer model. Our approach does not use Kasteleyn theory, but uses a mapping known since Temperley-Fisher, which maps the dimer model to uniform spanning trees. Remarkably, as observed by Benjamini, the “winding” of the branches of this spanning tree exactly measures the height function of the dimers. We combine this approach with the developing universal scaling limit results of the uniform spanning trees, revolutionized by Schramm through the discovery of SLE. We show that the continuum “winding” of these continuum limiting spanning trees converge to the GFF and harness from this the universality of the scaling limit. A key input in identifying the limit is the so-called imaginary geometry developed by Miller and Sheffield. In a more recent work, we extend this universality partially to general Riemann surfaces as well.

This talk is based on the following preprints and some works in progress.