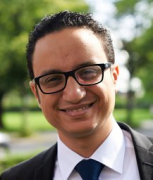 Transport in disordered one-dimensional wires is described by diffusion at short distances/times and by Anderson localization at long distances/times. I will investigate how this picture is altered in a disordered multi-channel wire where some of the channels are topologically protected. This scenario can be realized at the interface between two quantum Hall systems, in a Weyl semimetal in a magnetic field or at the edge of a quantum spin Hall insulator. Technically, the problem is described by a $0+1$-dimensional field theory in the form of a supersymmetric non-linear sigma model with a topological term. I will show how to solve this field theory exactly to obtain DC (static) transport quantities such as DC conductance and shot noise as well as dynamical responses such as diffusion probability of return and correlations of local density of states. I will discuss several surprising findings of this exact solution. First, I find that disorder is much more effective in localizing the diffusive channels in the presence of topologically protected ones. This can be understood in terms of statistical level repulsion by mapping the problem to that of a random matrix ensemble with zero eigenvalues. Second, I find that localization corrections dramatically alter the long time behavior of the return probability in a system described by diffusion+drift equation at the classical level. Finally, I find that in a disordered wire with topologically protected channels, the wave functions display level attraction rather than level repulsion.